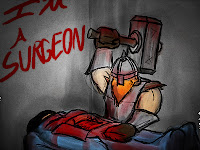 цитата: «"i had that troll's head in my sights," said the young marks-dwarf.
"one more second and i would have claimed its teeth."
troll's teeth were only a rumor in kogar's part of the the country.
it was said that some marksmen wore whole necklaces of teeth and
tusks. but kogar was not one to kill from a distance. he wanted to
look evil in the face and strike it dead. his finger's drifted
instinctively toward the hilt of his father's sword.
"are you with us, kogar?" asked the knight.
"to the death," kogar shouted.
the knight looked kogar in the face and winked. the young dwarf felt
the fear, barely concealed, fade back into the shadows. he looked
back at the marks-dwarf, who was pointing out the features of his new
toy, a dwarven crossbow.
"all you have to do," said the marks-dwarf, "is flush the troll out of
the cave, and i'll shoot'em dead."
"trolls?" asked kogar. "i signed on to kill dragons."
"little by little," said the marks-dwarf, "the mountain will crumble."»